ZHENGZHOU, China, Feb. 23, 2022 /PRNewswire/ — The closing and award ceremony for the “Shaolin Kung Fu Online Games” was held on Feb.15 at the Shaolin Temple in China’s Henan Province. Broadcast live online, the closing ceremony brings together all Shaolin disciples and kung fu enthusiasts across the world to enjoy the atmosphere. 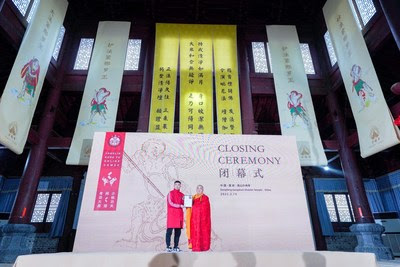 As unique online competition forms were staged, 5,368 kung fu enthusiasts from 94 countries and regions came to add glory to the event.

In the meantime, a professional judge panel comprised of 11 national-level judges and warrior monks was installed by the Shaolin Temple, and the entire judging process has been broadcast to the global audience.

“Not only did participants have their kung fu skills and physical fitness improved, but also themselves refreshed and invigorated,” commented Yanbin of the Shaolin Cultural Center in St. Petersburg, Russia, the winner of the “Outstanding Contribution Award” at the Games.

The competition has been lavished with support from the government, institutions, and enterprises of countries all around the world. UNESCO Ambassador, former Austrian President, Austrian Ambassador to China, New York Mayor, Slovakian official, the Shaolin Kung Fu Federation in Japan, and members of parliaments and religious leaders from many countries extended congratulatory messages to the organizers, and so did the celebrities such as Jackie Chan and Wu Jing.

For the convenience of overseas Shaolin disciples to practice Shaolin kung fu, the Shaolin Temple has launched various academic and vocational training programs for kung fu lovers around the world in addition to Shaolin Culture Centers around the world and the kung fu schools in Dengfeng of Henan.

With a history of more than 1,000 years, the Shaolin Temple is now seeking a more innovative way to inherit and spread Shaolin kung fu. The Shaolin Kung Fu Online Games 2022 marks a new start, and more diversified activities will be launched online and offline in the future.

LONDON and CAPE TOWN, South Africa, Nov. 3, 2021 /PRNewswire/ — Globeleq, Africa’s leading independent power company and the majority partner in the Ikamva Consortium, has been selected to contribute more clean and renewable wind and solar projects across the country. The six wind and six solar PV projects will total 1,274 MW of generation […]