BEIJING, May 25, 2021 /PRNewswire/ — A news report by China.org.cn on US politicization of tech supply chains is both risky and costly.

In 2019, the Trump administration unleashed its “tech war” on China, with the goal of blocking China’s development in high tech sectors by preventing targeted companies from procuring components manufactured in the United States.

As the White House ramped up its hostility toward Beijing, it intensified its measures. The most notable target was the Chinese telecommunications firm Huawei, which was first placed on the commerce department’s “entity list” putting it under export controls. Later, it was also subjected to the “foreign direct product rule,” which unilaterally banned overseas companies who use U.S. patents in their own semiconductor production from supplying the company. 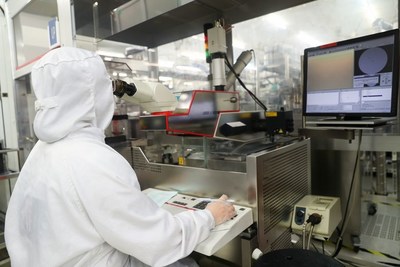 Even though President Joe Biden has since taken office, he has yet to reverse these decisions. Instead, he has pressed on in the mold of an “America First” policy when it comes to semiconductors with the goal of consolidating a U.S. monopoly of the industry and controlling “technologies of the future.”

What have been the consequences of these decisions? In fact, they have had adverse effects for America and the world at large.

The aggressive politicization of the semiconductor sector against the world’s second largest economy is disrupting a global supply chain, reversing globalization and creating an effect of “localization.”

China has massively boosted its investment in semiconductor capabilities on a whole-of-society scale, while America has created political risks for tech firms who rely on their supplies. On an organizational level, firms have been bulk buying semiconductor and lithography manufacturing equipment from the Netherlands, Japan and South Korea, as well as panic buying semiconductors to hedge against potential future restrictions. Companies are losing confidence in traditional suppliers.

This uncertainty has created a global shortage in semiconductors, which is causing risks to the global economy. The shortage has created delays in the manufacturing and supply of electronic consumer goods and automobiles, which has forced many factories around the world to postpone production and furlough workers. For example, Nissan’s Sunderland factory in the U.K. was forced to slow production for three weeks due to a lack of semiconductors. Another consequence has been growing inflation, which undoubtedly contributed to the unexpected surge in the U.S. consumer price index, which jittered global markets last week.

These adverse outcomes show that weaponizing technology supply chains against China will not make America better off. Localized supply chains are more expensive and will cost the U.S. considerable market share as Beijing develops its own industry. This year, China will commence production of 7-nanometer nodes and quickly cede dependency on lower nodes, with Semiconductor Manufacturing International Corporation (SMIC) investing in a $2.35 billion chip foundry in Shenzhen set to produce 28-nm integrated circuits. This has allowed companies such as Huawei to continue developing their 5G networks despite U.S. sanctions.

In China, government investment in the sector has already amounted to $150 billion, while earmarked investment for the 14th Five-Year Plan period (2021-25) extends to $1 trillion. While this is seen as a political necessity, few disagree that an open-ended global industry remains preferential. Leading foreign semiconductor companies still seek to compete within the Chinese semiconductor market due to its growing economy and surging demand, showing the dangers of upheaving this market.

In this case, it is worth noting that one thing is certain when it comes to current U.S. policy: Weaponizing semiconductors creates a “lose-lose” situation, carving up a global industry into localized spheres, creating a fractured market and raising prices. That being said, it will still not block China’s technological advances.

For all involved, it is a costly and unpredictable path with knock on effects all the way down to the ordinary consumer.

Tom Fowdy is a British political and international relations analyst and a graduate of Durham and Oxford universities. He writes on topics pertaining to China, the DPRK, Britain and the U.S. For more information please visit: http://www.china.org.cn/opinion/TomFowdy.htm

Opinion articles reflect the views of their authors, not necessarily those of China.org.cn.

High-performance power electronics take e-mobility to the next level and advance a more sustainable energy future for all Zurich, Switzerland, May 10, 2022 (GLOBE NEWSWIRE) — Hitachi Energy, the global technology and market leader in power grids, today announced it will launch globally RoadPak, its pioneering power semiconductor module for electric vehicles at PCIM Europe, […]